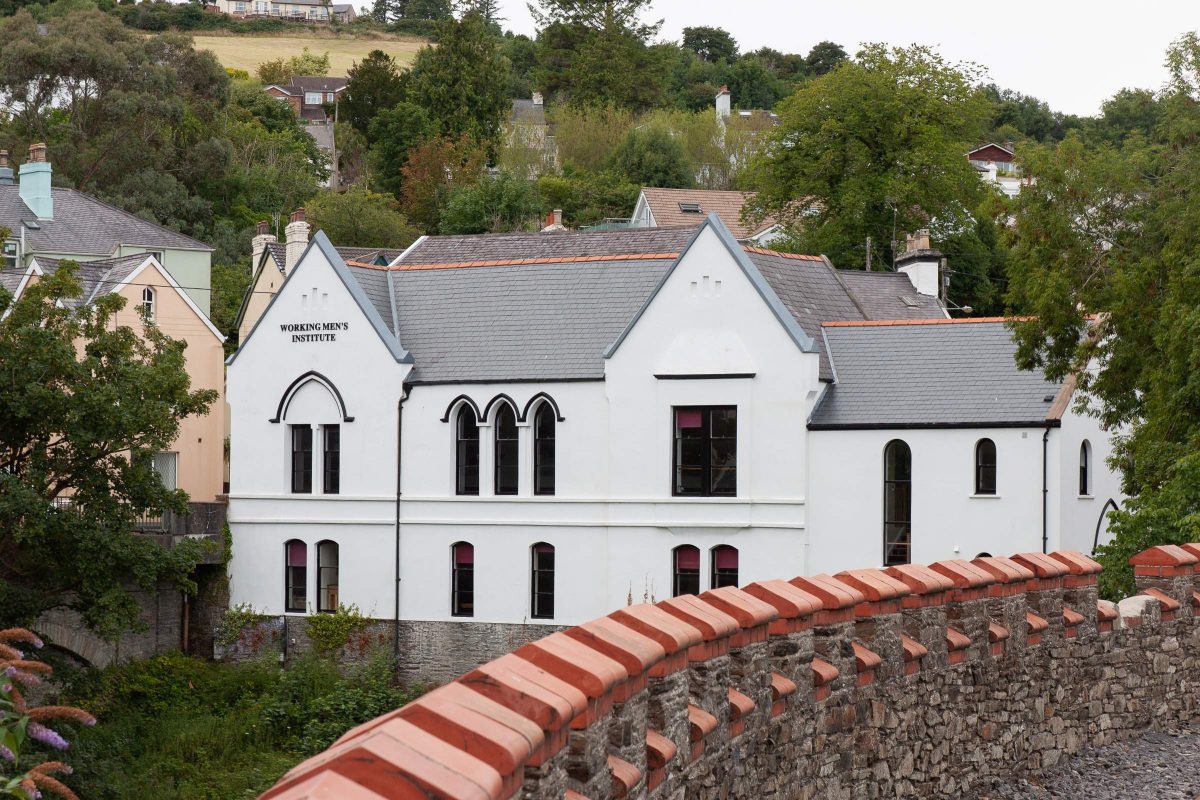 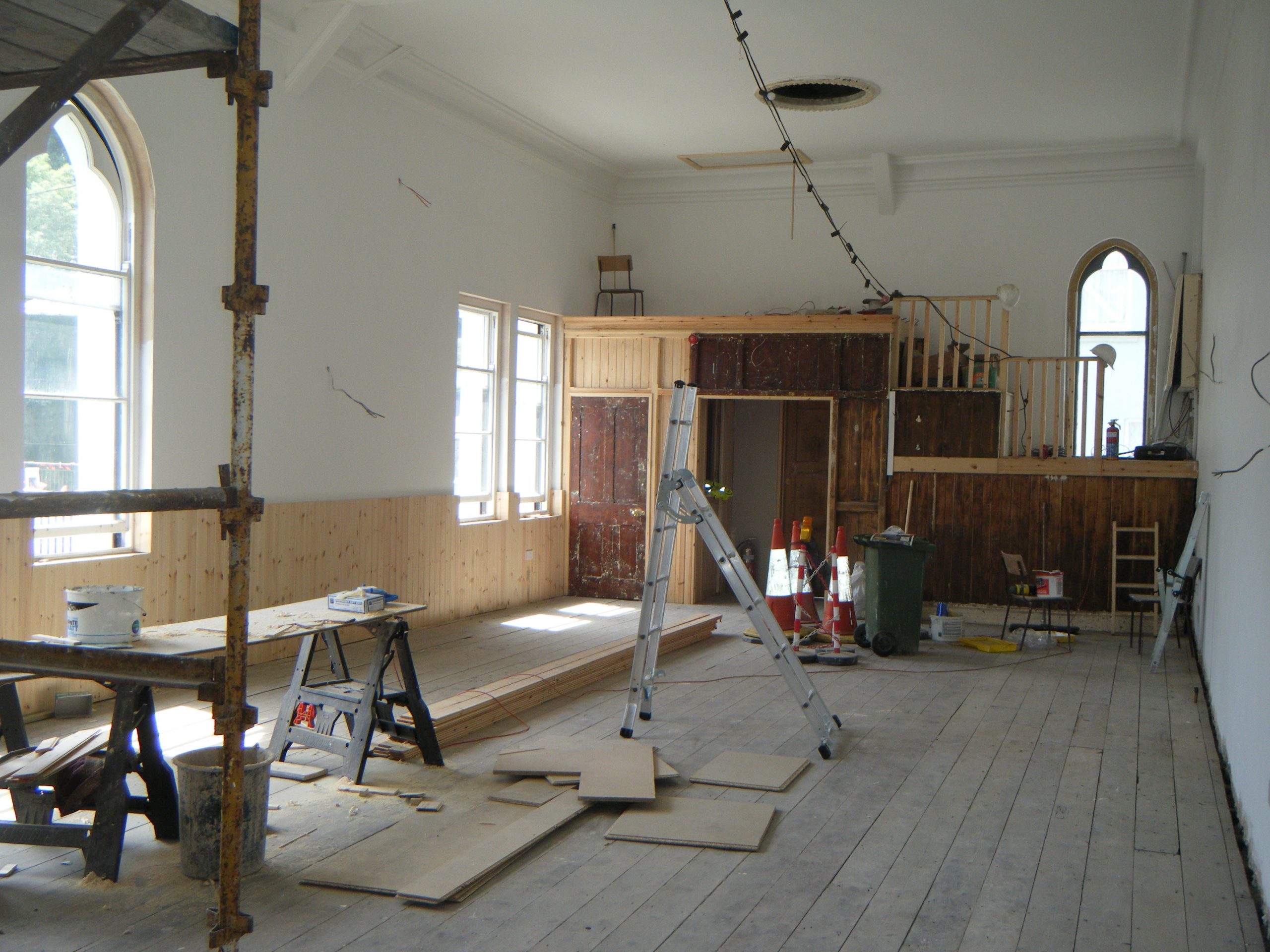 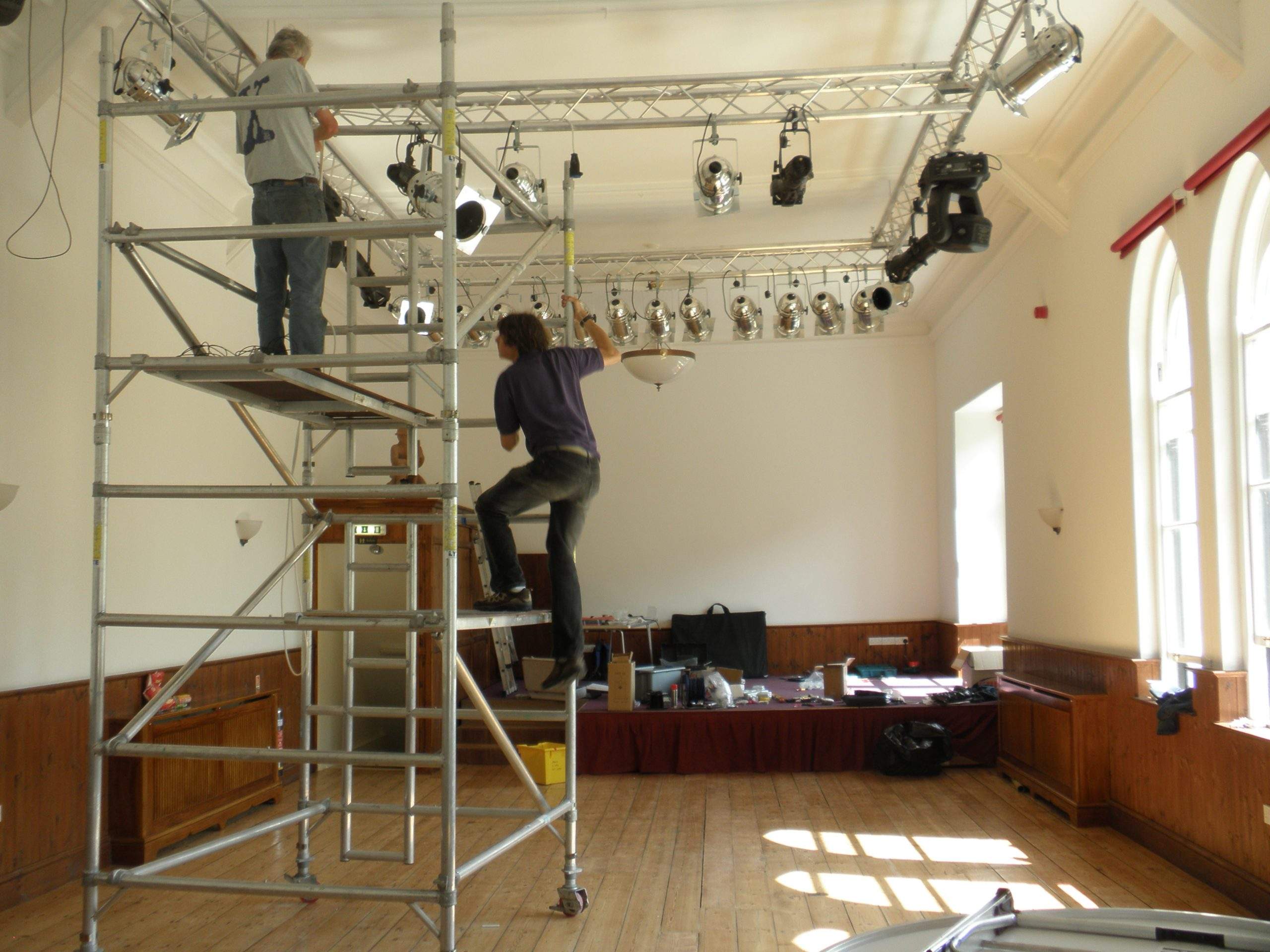 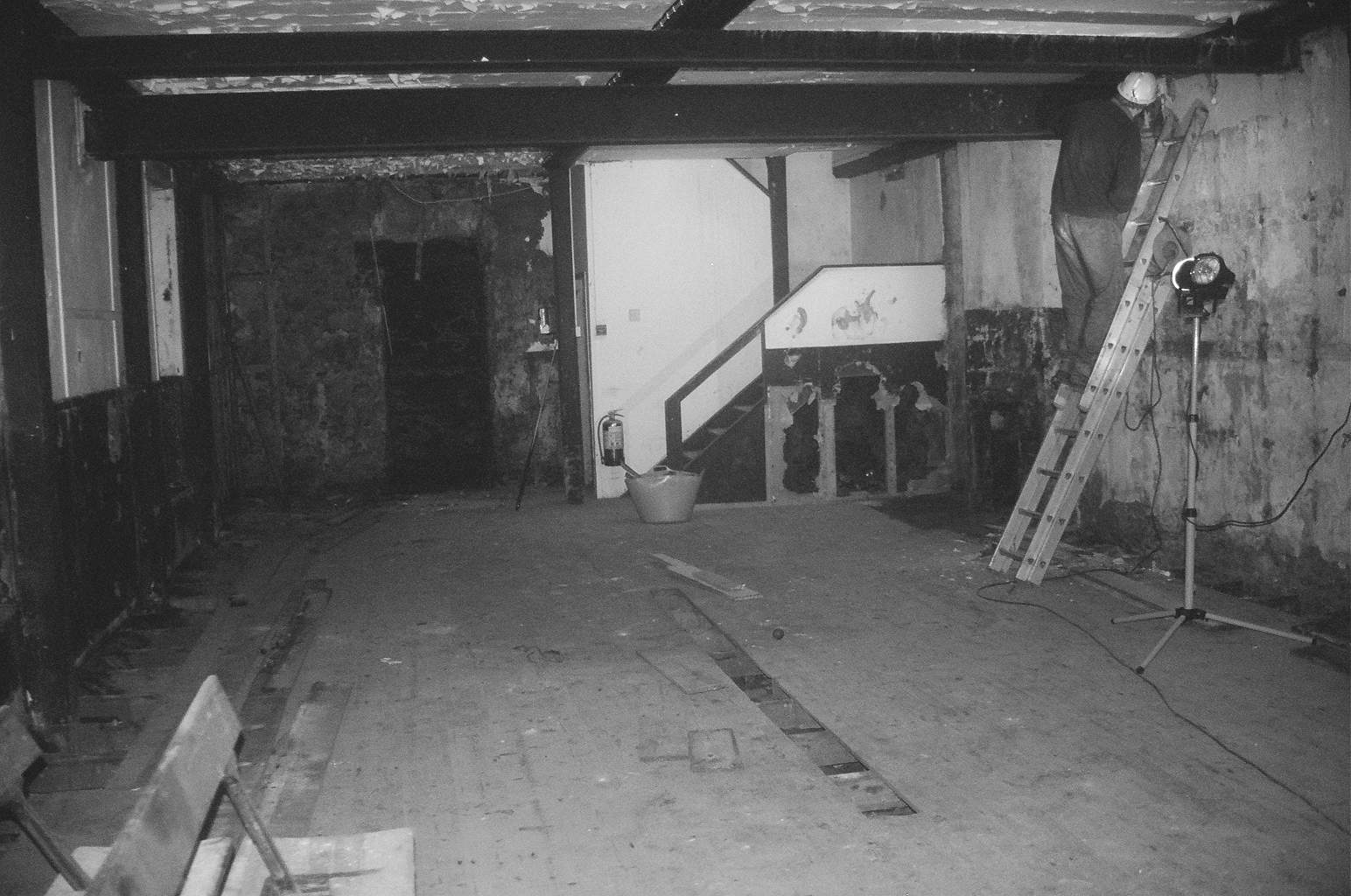 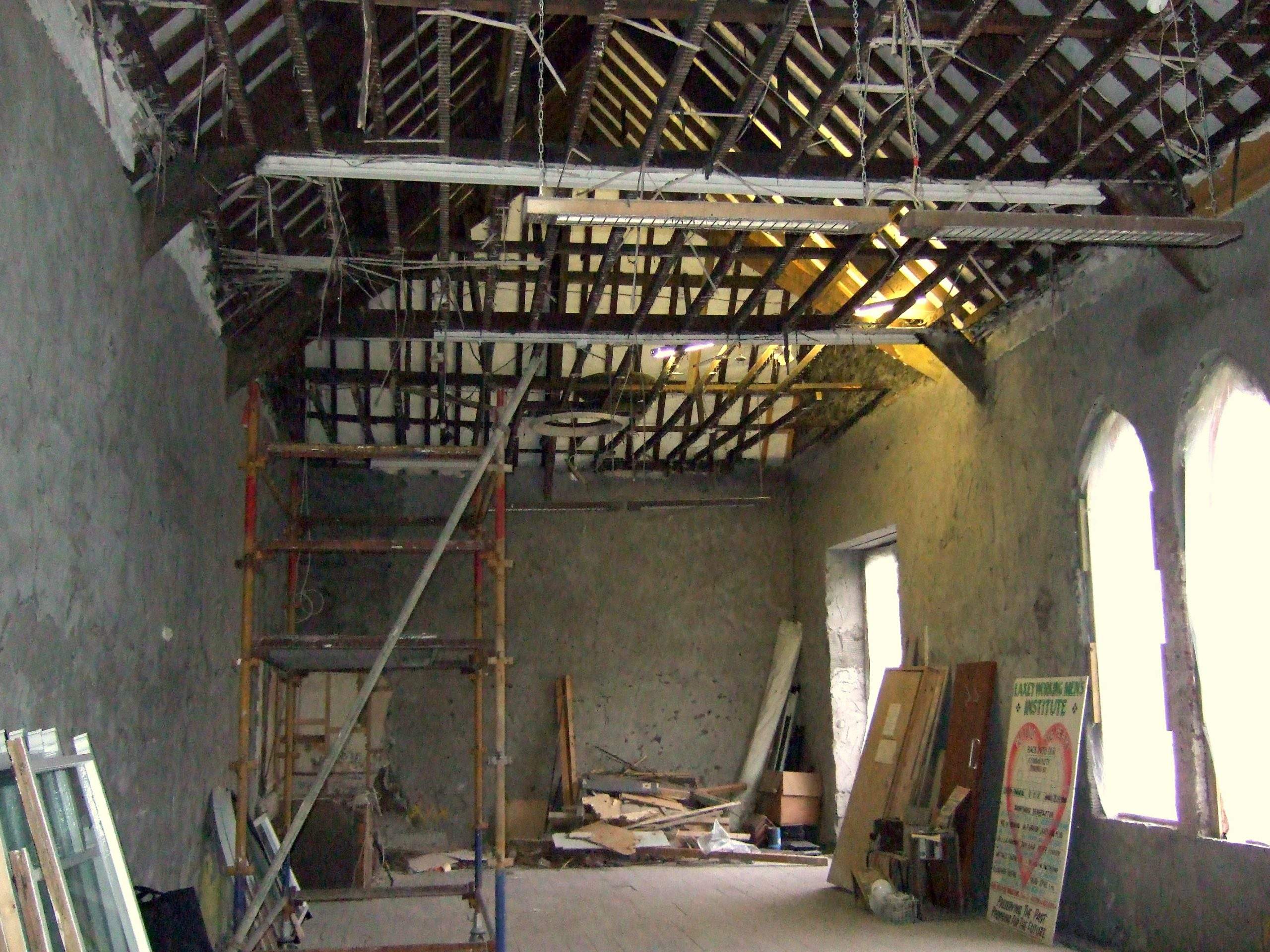 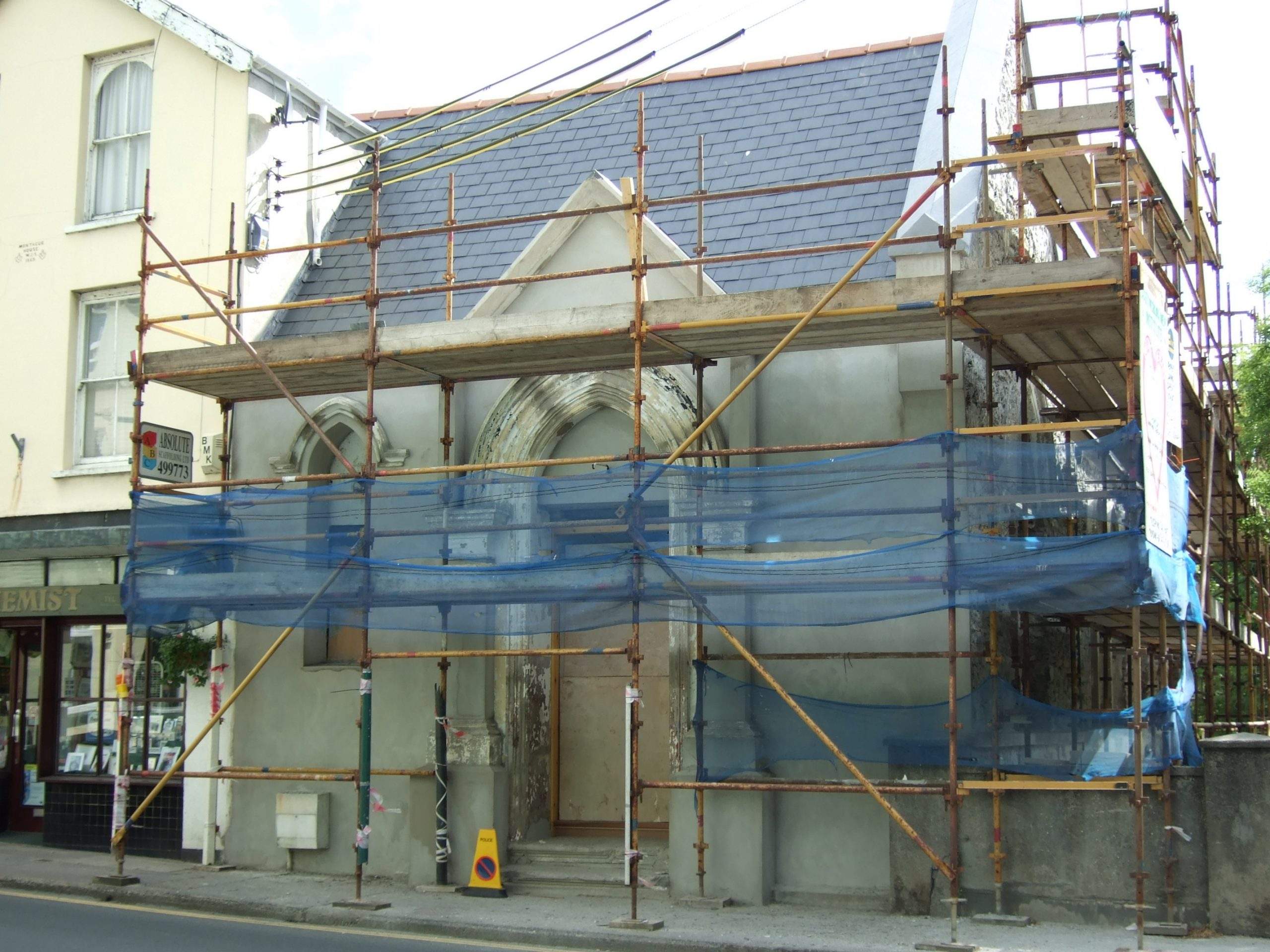 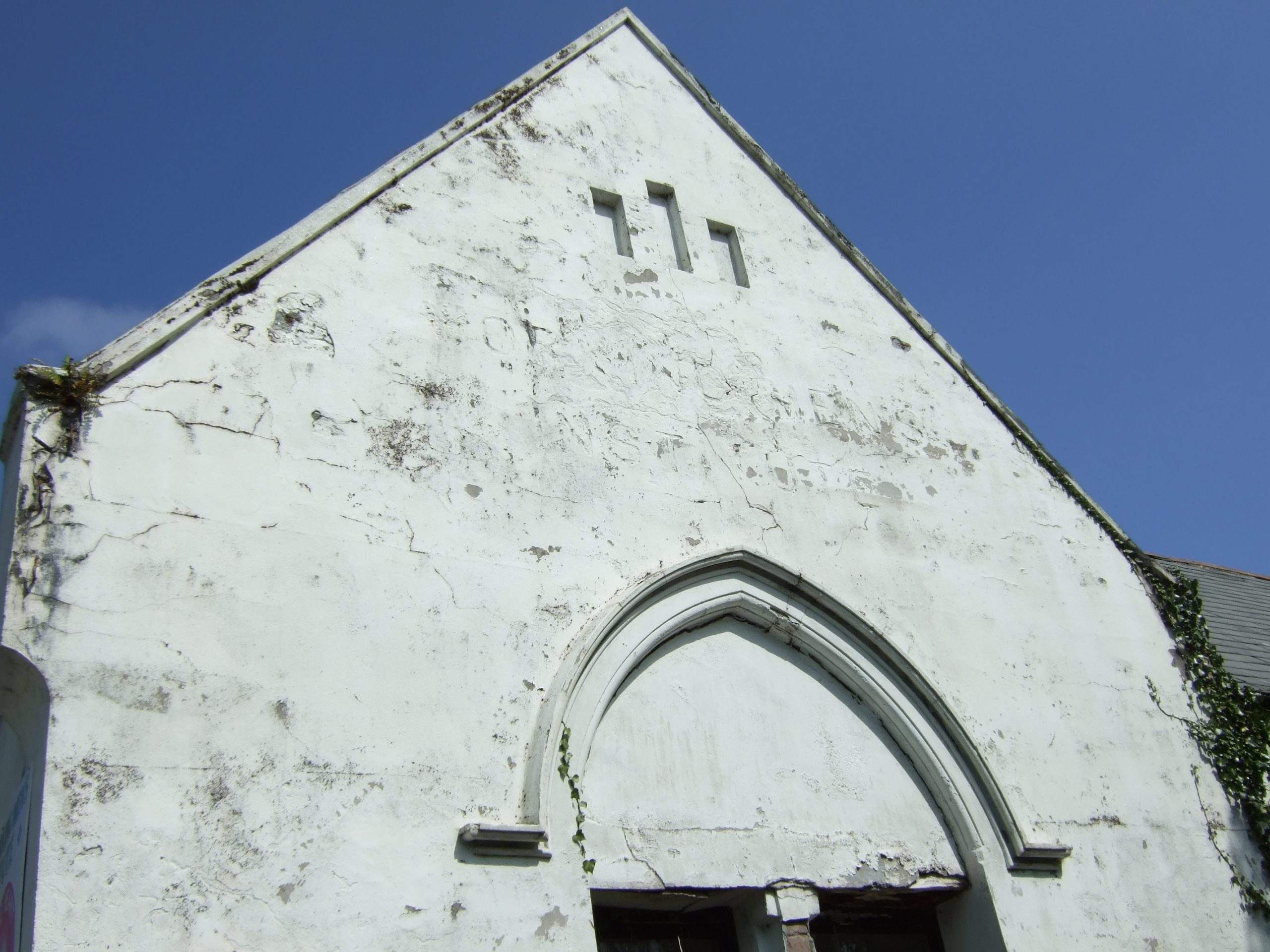 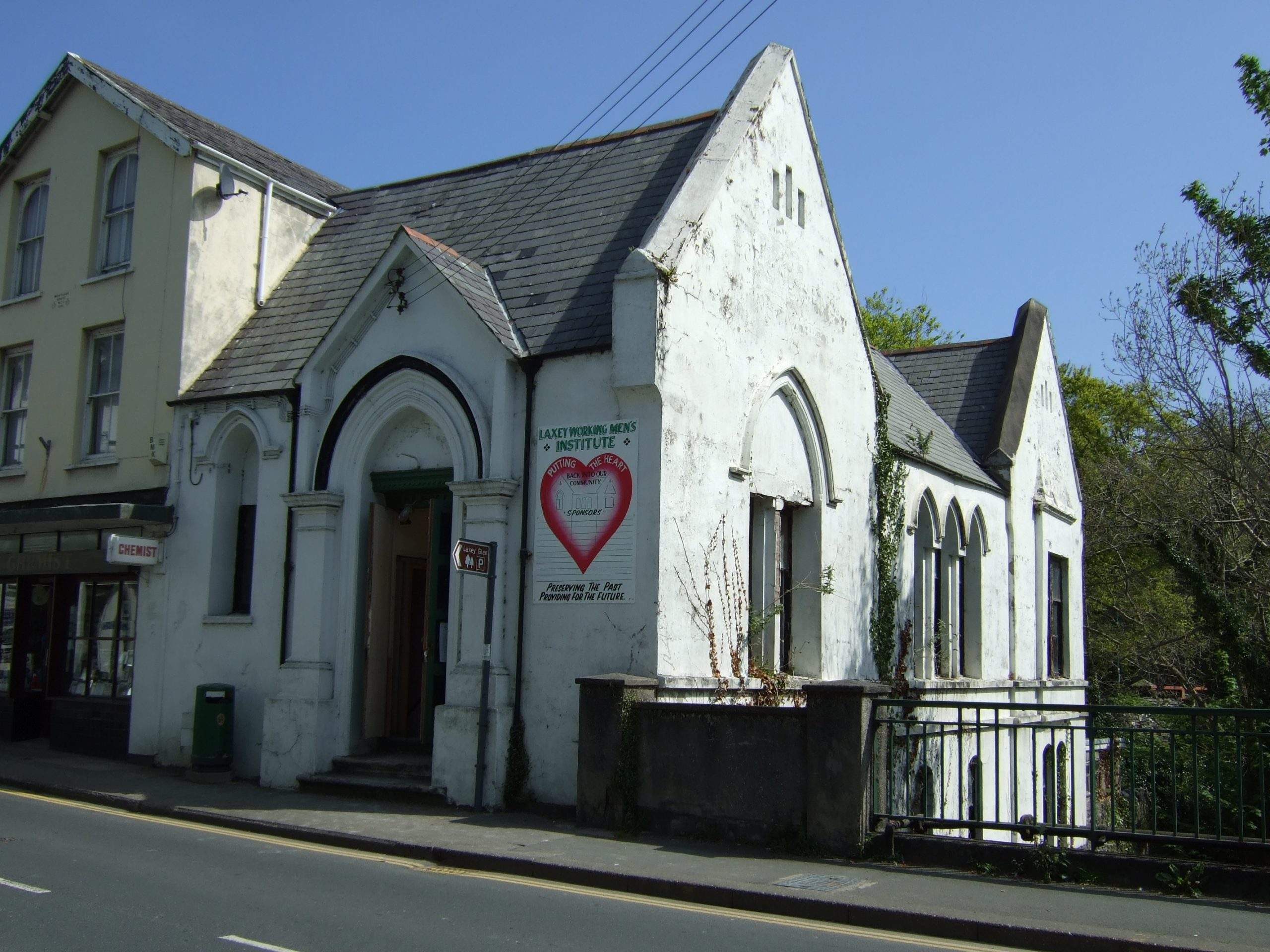 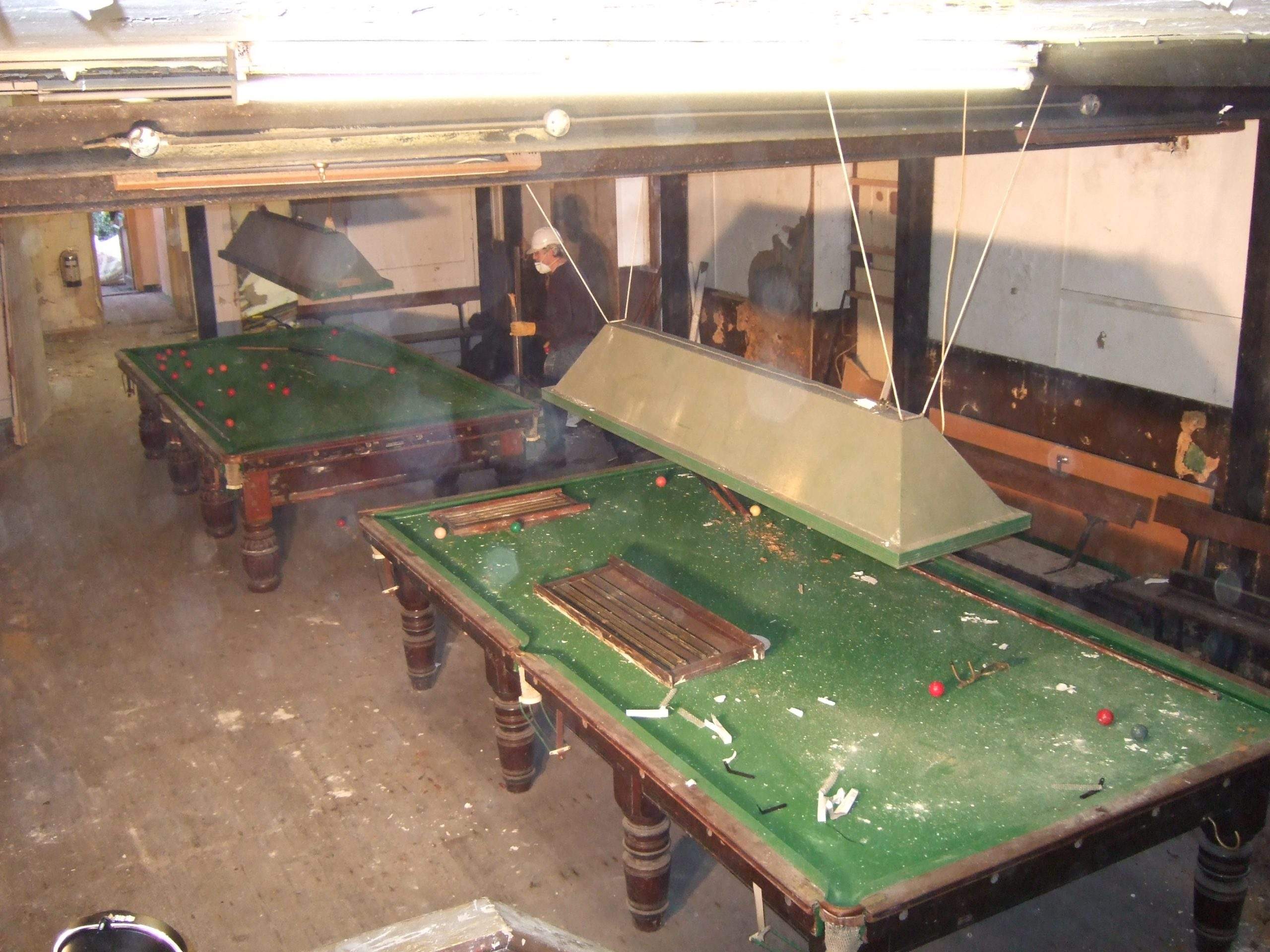 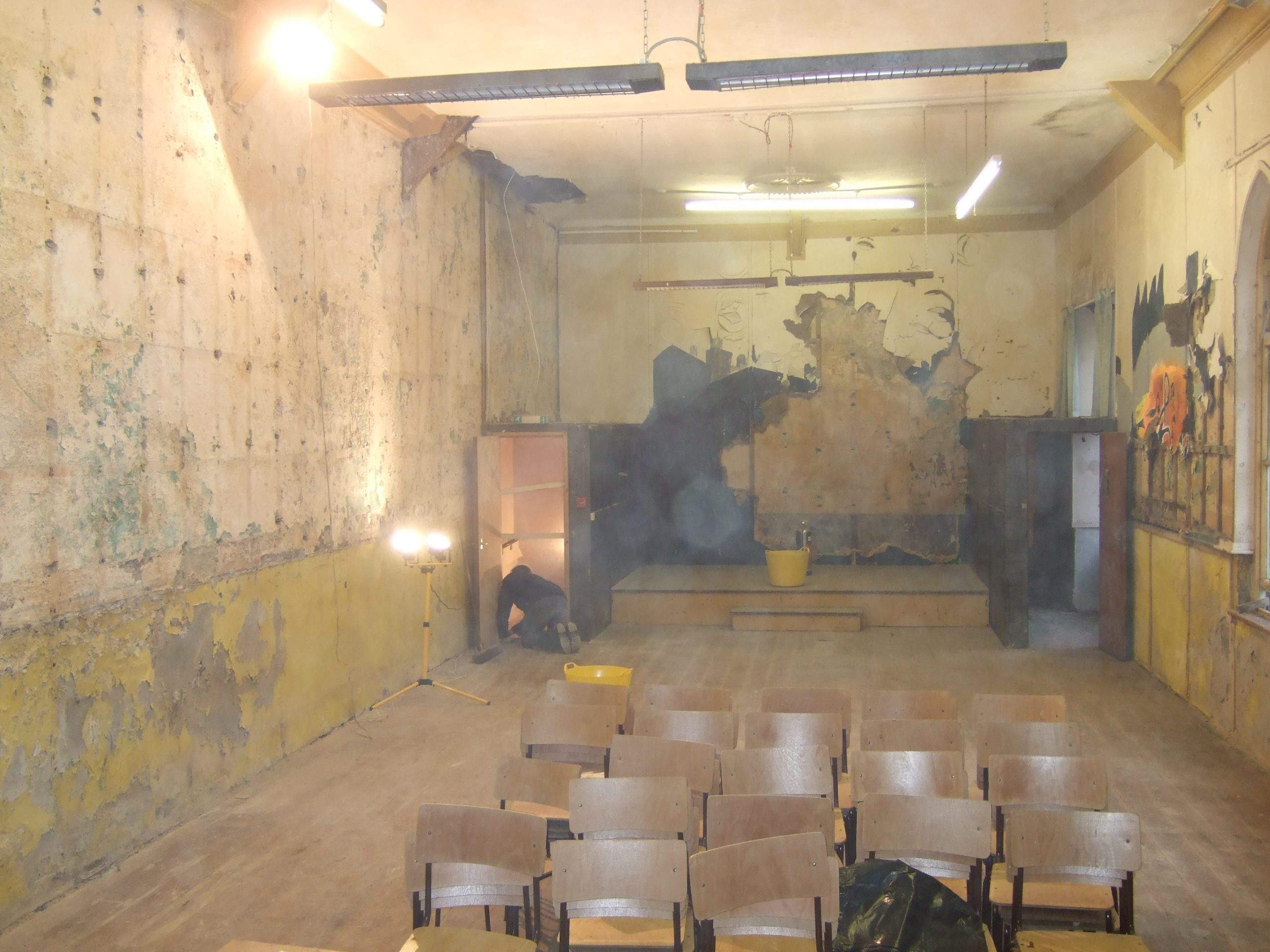 The “Laxey Working Men’s Institute and Public Reading Rooms” Situated on the New Road , was built in 1876 by the miners and the Flour Mill workers of the village as a recreation hall and reading room.

Over the years, many important events had been held here, including the first election of the Village Commissioners in 1895. Many miners strike meetings were held in the building, the sales of “chattels and household items” of those emigrating to find work were also conducted there and the enquiry into the Snaefell mine disaster was also held at the hall. The building had been used for many social events and meetings in the village and had at one time even served as a small cinema!

The Institute has served the village well for many years but in later years it had fallen into disrepair until eventually it was closed to the public around 2002 as it had become completely derelict. In 2007 a group of local volunteers formed who felt that the ‘Institute’ was an important and historic building with strong connections to Laxey’s’ Industrial and social heritage. Being one of only two Registered buildings in the village it was felt that it was worthy of preservation, that it was of ‘national importance’ to preserve and bring the building back into use as a community hall and ‘social heart’ of the village.

The aim for the first phase was to have a dry and sound shell that was weather proof, which would secure the building and stop it deteriorating further. Then when it was watertight and sound on the outside, fundraising could start for a second phase of the inside restoration work sometime in the future.

Historic building preservation specialists were engaged to assess the structural integrity of the building and they were very encouraging about the possibilities of bringing the building back into use. They were impressed that some parts of the building were in such good condition considering its age and ingress of water over the years. Huge ‘pitch pine’ timber joists were used in the construction of the roof and 1st floor, and they were most interested in how the first floor had been constructed in a ‘mining style’ from underneath, with props and a ring beam around the edges, providing double support. The first floor is incredibly strong.

Once a roof survey had been completed, and before the slates could be replaced, the roof timbers had to be sound enough to take the weight of the roof.
With the ingress of water over many years, some of the main A frame joist ends were rotten and in danger of imminent failure, causing a collapse of the roof. A professional company was engaged to splice in new timbers where necessary and brand new timbers were inserted where the damp had completely rotted them away over the years.

Many thanks to the Isle of Man Government’s conservation office, for their help, advice and financial support with this aspect of the project.

We are also very grateful to our local roofer, who worked for a minimum fee, with volunteer labour, and often for free in his own time replacing the roof and giving us invaluable advice and help on other parts of the project. Not only was the roof letting water in, but the walls were too! So, all the external render was hacked off by the volunteers and the rotten wooden window lintels replaced at the same time.

Using professionals for the skilled aspects and helping out with labouring and manual tasks, the volunteers turned up every Saturday over a period of four years to get the job done. Taking the advice of other volunteer projects such as the Peel centenary centre and Laxey’s new football club house it was steered to completion.

Of course all this could not have been achieved with out financial backing, and we are so very grateful to all the people, from private individuals, to businesses, government departments the Coop community fund, the Manx lottery fund and our anonymous benefactor who have all very generously supported the project; donating time, money labour and materials.

A beautifully crafted honours board (donated by The Manx Box Company)is on display in the downstairs meeting room, highlighting the many people and  businesses who donated to the project.

A huge thank you to our workforce volunteers, without whom, the building would still be a derelict eyesore in the village. With the help of funding our dedicated management t committee have managed to create an arts and entertainment space where events and exhibitions can be held and with the help of the people
of the village and the Island , this important building can once again be part of the community.

On 20th May 2011, Just four years after a restoration appeal had been launched, and 135 years after the original opening of the Institute, local resident and life long patron since the 1940’s, Mr Bob Kinrade, gathered with dignitaries, benefactors and restoration volunteers to perform the official re-opening ceremony, following the buildings complete restoration.

The Institute was built by the ‘working men’ of the village and fittingly restoration team were all working men of the village who with the help of so many people, and all those who have given financial support have brought this historic building back to life, to serve and become a social centre where people who live in the area can meet to feel part of the community.

We now have an enthusiastic and committed management committee, who are actively promoting and organising events and live music to ensure that the building remains well used, viable and a hub of village life for many years to come.

An article appeared in the Manx paper when the Institute was first opened in May 1876, (135 years after the reopening, almost to the week) stated:
“The newly constructed Institute is situated on the New Road, it is a handsome building and was built by the miners and the workers of the village as a recreation hall and reading room to “improve the minds and educate” the working class men of the village, which would hopefully “emancipate
their minds from the slavery of ignorance”!

One volunteer worked quipped the “If we’d have been clever enough to have known what we were letting ourselves in for, we’d probably never have started”!

Many Thanks once again to all those who helped make this possible.